We are known for creating and implementing robust IP protection strategies across the African continent.

To achieve this, we work hand-in-hand with corporate clients – from global companies to SMMEs – and we collaborate with legal advisors, agents, and inventors who have an interest in our core geographical regions, Africa and also the Caribbean.

Our clients trust us to help them navigate a rapidly changing global IP landscape, while offering a uniquely personal experience that feeds off our firm’s rich cultural and social diversity.

Spoor & Fisher is ranked in the top band in the latest editions of leading legal directories, both local and international, including Managing Intellectual Property, The Legal 500, Chambers and Partners, World Trade Mark Review, and others.

Equally, we have a reputation for pioneering thought leadership and contributions to IP law and academia. Our lawyers have authored authoritative text books, drafted legislation, and acted in some of the most ground-breaking intellectual property cases of the last century.

Inspiration, innovation, and achievement are only meaningful when they have a purpose. When they extend beyond our circle – creating value for our clients, staff, communities, and the environment we call our home.

This is why various CSR initiatives are dedicated to our people, the industry, civil society, and the planet; including both charitable donations and contributions of time, knowledge, skills and expertise to not-for-profit causes.

Our Vision and Mission

Our vision is to be the pan-African intellectual property hub of choice for IP owners now and in the future.

Our mission is to protect, manage and enforce our clients’ IP, leveraging technology to create innovative, pragmatic and robust solutions.

We will continue to harness the powerful intellect and wide range of skills of our people: a truly exceptional group of patent and trade mark attorneys, scientists, engineers, technical experts, administrative teams and support staff.

In 1904, Alfred Leonard Spoor, known as ‘Spoor’, arrived in South Africa and enrolled as a patent agent. Spoor initially worked with another firm, but opened his own practice, AL Spoor, in Johannesburg in 1920. It turned a net profit of R760.

Shortly before WWII, Leonard Joseph Fisher, known as ‘Len’, approached Spoor for a job as a technical assistant. Two years later, he left for Europe to join the Signal Corps, working on war-time radar but, when the war was over, Len re-joined the firm, which changed its name to AL Spoor & Fisher. Spoor passed away in 1948.

AL Spoor & Fisher began to build global relationships from 1960, making trips to Japan and the USA.

In 1967, the firm dropped ‘AL’ from its name and became Spoor & Fisher. Within 10 years Spoor & Fisher had opened an office in Jersey Channel Islands, which became the continent’s leading IP practice.

Len retired in 1979, but Spoor & Fisher continued to grow, expand and serve clients worldwide, ultimately achieving its centenary in 2020. 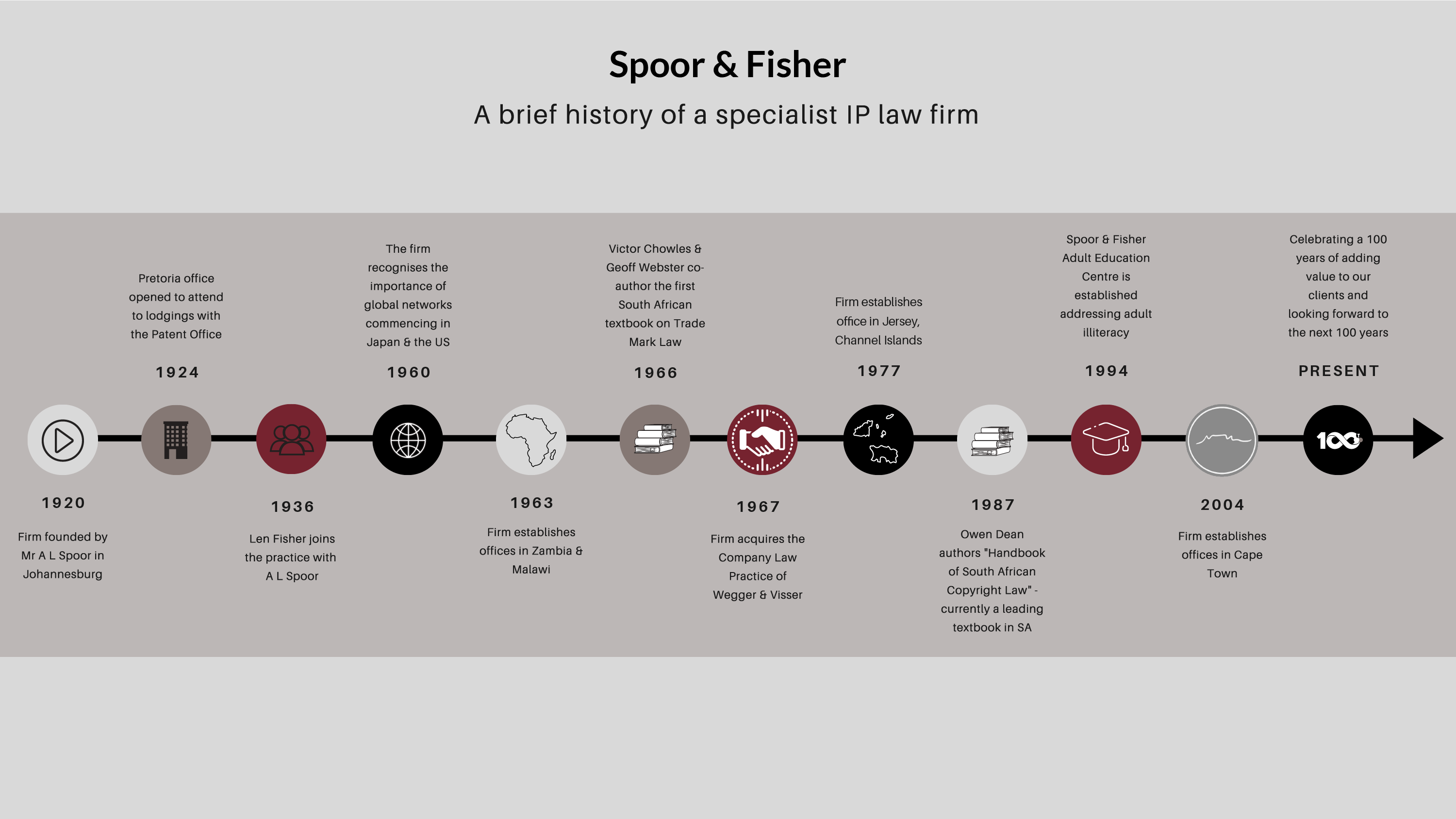 Spoor & Fisher’s South African offices considers it a privilege to be a Level 1 B-BBEE contributor, rated by the SANAS rating agency in accordance with the Amended Codes of Good Practice, issued in terms of Section 9(1) of the South African Broad-Based Black Economic Empowerment Act 46 of 2013.