Filing, prosecuting, managing, and enforcing patents in Africa, a continent with 59 countries and islands, requires specialist intellectual property knowledge, experience, and on-the-ground resources and relationships, because each African country has different laws, policies, and infrastructure, with different stages of development.

Why Spoor & Fisher for patents in Africa?

We’ve been in Africa for over 100 years, where patent owners rely on us as their Africa hub; their safe pair of hands. With an established network and local relationships in all 59 African countries and surrounding islands, we know how to handle the intricacies and anomalies involved in obtaining patent protection in every African country. We’re known for combining our technical expertise with expert legal knowledge and high levels of responsiveness together with a practical approach.

Spoor & Fisher is the intellectual property partner of choice across Africa, where local and international companies, law firms and inventors trust our expertise, experience, and know-how to protect their patents.

With physical offices in South Africa, Gambia, Ghana, Malawi, Zambia, OAPI (via Cameroon) and ARIPO (via Malawi), a direct filing presence in Sierra Leone and Zanzibar. In those countries where we do not have our own offices, we have carefully appointed local associates, with whom we have a long-established relationship. We don’t watch from afar; we actively manage the entire patenting process throughout Africa.

Spoor & Fisher is involved in drafting patent legislation in Africa, and our patent attorneys have written textbooks, and been involved in several of the most important IP cases in Africa.

Are patents enforceable in Africa?

It is possible to enforce patents in Africa. Most patent litigation in Africa is in South Africa although other African countries where there have been patent litigation include Nigeria and ARIPO member countries, such as Kenya and Zambia. There are African countries where enforcing patents is challenging but the situation is fast improving and certainly the cost of securing a patent in the challenging countries, we believe is justified even taking these uncertainties into account.

Are there National and regional patents in Africa?

In Africa, there are two options when it comes to patent protection – national and regional. A stand-out feature of patent protection in Africa is the existence of two important regional patent filing systems, namely:

The two systems, OAPI and ARIPO, are quite different in their nature. These systems are important, but it is worth bearing in mind that several of Africa’s major economies belong to neither system for example Algeria, Angola, Egypt, Morocco, Nigeria, and South Africa. 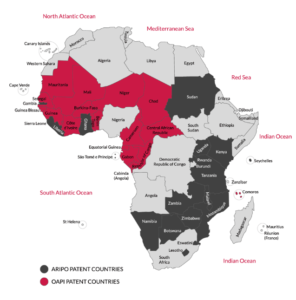 OAPI is a regional patent system that covers the following 17 African countries:

The PCT Chapter I and Chapter II deadline for OAPI is 30 months.

OAPI is a member of the Paris Convention, and it is possible to claim Convention Priority.

ARIPO is a regional patent system that covers the following 19 African countries:

Somalia is an ARIPO member country but has not acceded to the ARIPO Harare Protocol and therefore Somalia cannot be designated in an ARIPO patent application.
Although Tanzania (mainland) and Zanzibar (offshore) are united politically to form the Republic of Tanzania, they have different patent laws and separate patent applications are required in Tanzania and Zanzibar. Zanzibar is not a member of ARIPO.

All ARIPO member countries have ratified the PCT. The PCT Chapter I and Chapter II deadline for ARIPO is 31 months.

All ARIPO member countries are members of the Paris Convention, and it is possible to claim Convention Priority.

Are African countries part of the Patent Cooperation Treaty (PCT)

The Patent Cooperation Treaty PCT is an international treaty which has more than 155 Contracting States. Filing a PCT “international” patent application allows one to seek patent protection for an invention simultaneously in many countries instead of filing numerous separate national or regional patent applications.

The map shows which African countries are PCT members. 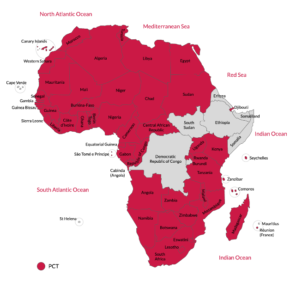 The Paris Convention for the Protection of Industrial Property was one of the first intellectual property treaties, and it covers three main categories: national treatment, priority right and common rules.

The map shows which African countries are Paris Convention members. 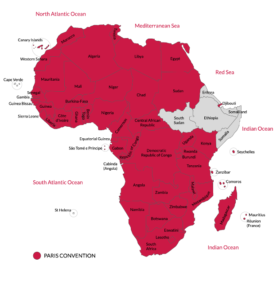