Considering the IP and Legal Implications of Gene Editing.

Global food security is increasingly challenging in light of population growth, the impact of climate change on crop production, and limited land available for agricultural expansion.

One solution has been presented in the form of gene editing, a technology – based on a natural process – that allows researchers to cut out certain bits of DNA in order to control traits. In practice, this can make a significant contribution to global food security, in part by improving so-called “orphan” crops that are regionally important to health, food security and rural incomes. But what are the intellectual property (IP) implications of gene editing?

Traditional gene modification in plants involves modifying the genome of cultured plant cells by introducing new genetic material and then regenerating whole plants. These methods have been vilified by the anti-GMO movement for introducing foreign DNA from other organisms, with anti-GMO groups arguing that we don’t know what the effect of introducing foreign genes into plants will be, nor the potential effect of consuming them down the line.

But gene editing is different: it mimics the natural process of mutagenesis, or changing or mutating DNA. It targets a single nucleotide in plant DNA to make it change advantageously, instead of waiting for nature to do so and hoping for advantageous mutations.

In my opinion, there is a significant difference between introducing foreign DNA into a crop that will eventually be eaten, and changing a single nucleotide in the plant’s DNA – in much the same way that naturally arising mutations would. This could also be why opinions are more polarised when it comes to genetically modified organisms (GMOs) than gene editing.

Regulatory developments indicate that some governments are adopting unnecessarily rigid regulations, considering that gene editing techniques are not that different from what occurs naturally through mutagenesis, barring the fact that the former are targeted.

One example of what is emerging as a seemingly rigid regulatory landscape is that of Europe. Recently, the highest court in the European Union ruled that gene-edited crops are GMOs, and must comply with the tough regulations applied to plants made with genes from other species.

In South Africa, our law is very similar in many respects to European law. South Africa’s regulatory law for GMOs, the Genetically Modified Organisms Act 15 of 1997, says that a GMO is an organism of which “the genes or genetic material has been modified in a way that does not occur naturally through mating, natural recombination or both”.

This is broad enough to encompass gene editing and to hamper the regulatory approval of plants that have been modified using gene editing techniques.

And what of the intellectual property implications of gene editing?

But there is no case law in South Africa to interpret the meaning of this section.

In Europe, it is possible to obtain patent protection for transgenic plants, plants obtained by mutagenesis (including gene editing), and/or biotechnological methods of producing them, so it is likely that our courts will follow the European approach.

In addition, it is also possible to obtain Plant Breeders’ Rights protection, provided that the plant meets the requirements of protection; i.e. that it is new, distinct, uniform and stable.

“Crispr has been democratized,” says Rodolphe Barrangou, editor of The Crispr Journal and head of a multi-disciplinary Crispr lab. “With 100,000 labs and 10 people per lab, we now may have over a million geneticists working with this technology.”

This is true, and it bodes well for food security.

If you look at the graph below, which is based on a patent search formulated to identify patent filings related to gene editing in plants or crops, you will see that this appears to be an exponentially and rapidly increasing field, especially over the last decade. 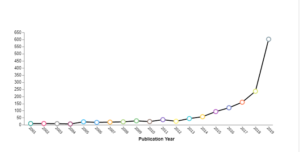 What’s more, the fact that the CRISPR/Cas9 system is patented does not prevent others from obtaining patents for specific embodiments of this technology and, in particular, from using it to produce new, stronger crops.

In other areas, a standard mechanism for creating openness in research and development has involved putting material in the public domain, outside the world of property. So researchers in the field of gene editing may decide to use IP rights to create a “food security commons” – much like developers of free and open source software use software copyrights to impose requirements of openness on future programmers; requirements greater than those attaching to a public domain work.

There’s nothing that precludes a patent commons for gene editing technologies, and this could be a great way to develop technologies for solving problems linked to food security. For example, a similar “Covid-19 commons” has recently been proposed for sharing solutions to combat the pandemic. Although a patent commons operates much in the same way as open source software or creative commons, the difference is that copyright is automatic, while patents need to be applied for.

My view is that, if we can combine the scientific strides being made with the appropriate IP protection and alignment of the regulations with the actual risks posed, gene editing could very well turn out to be an important technology for future food security. For more information, visit www.spoor.com

Chyreene Truluck is a Patent Attorney and has MSc (Genetics) and LLB degrees. She is an Attorney of the High Court of South Africa.

Chyreene specialises in domestic and international patent prosecution, particularly in the fields of biotechnology and life sciences. She also has experience in commercial IP and plant breeders’ rights matters.